Drugs, sex, and phallic imagery aren’t the first things that spring to mind when you think of the popular Biff, Chip and Kipper reading books.

But eagle-eyed parents have taken to Twitter to share examples of some unexpected images hidden in the books, which are aimed at teaching literacy to children aged 4 and over.

In one book, you can see three men disappear into the bushes, and then, on the following page, an old woman walking past, and being so startled that her glasses fall off. 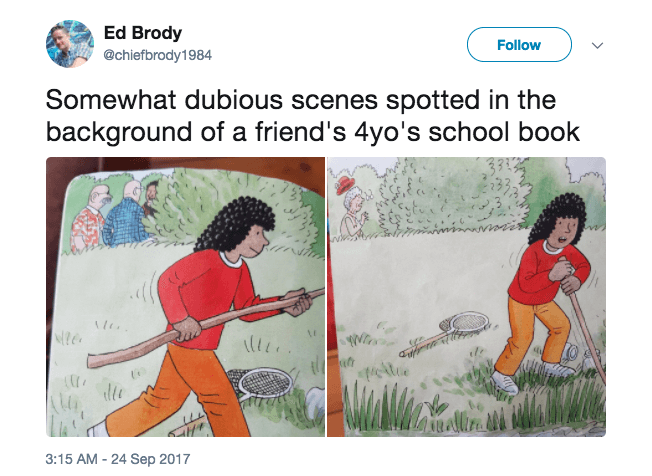 In another book, a stack of building blocks spell out the word ‘hepatitis’. Although the book has since been withdrawn, according to Oxford University Press, there are still several copies in circulation. 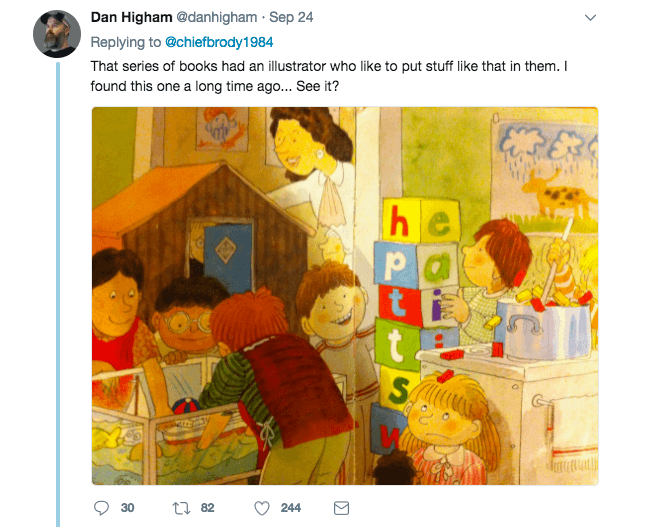 Another widely shared picture from the learn-to-read series features a “dodge”-looking priest in a girls’ changing room. 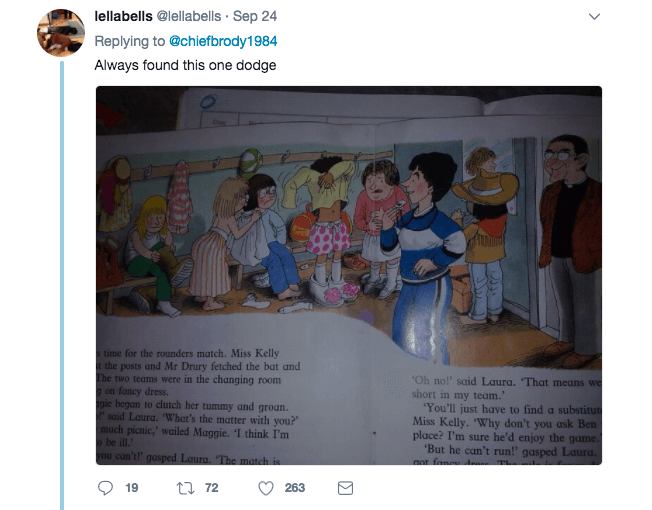 Other books feature such things as a market stall holder selling “E’s”, references to murderous priests, and even a dog walker bearing more than a passing resemblance to Adolf Hitler. 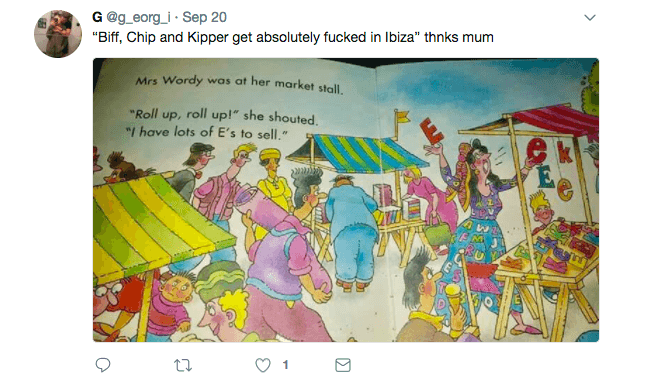 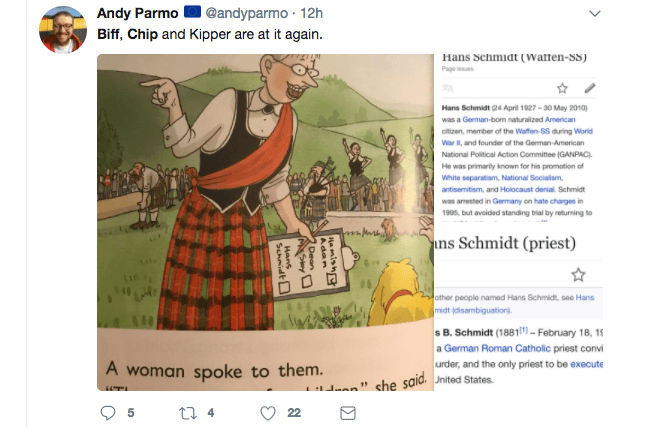 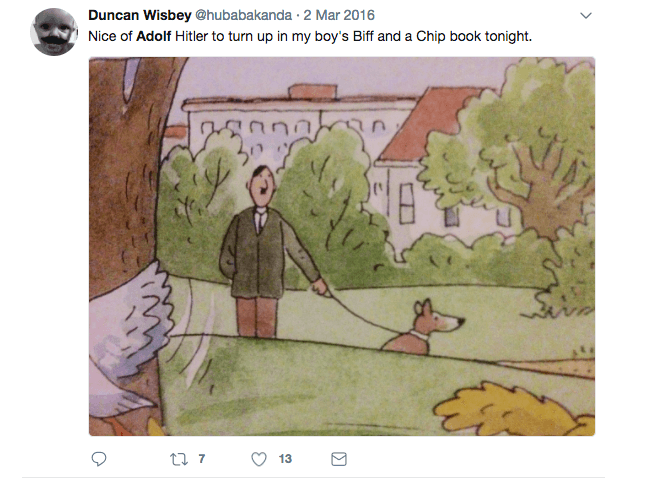 Former Prime Ministers Margaret Thatcher and David Cameron have also had cameo roles in the series, along with other well-known figures such as Jermey Beadle and disgraced entertainer Rolf Harris. 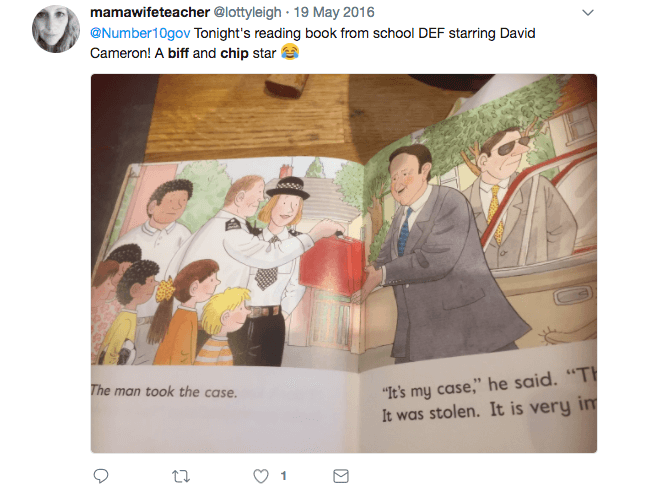 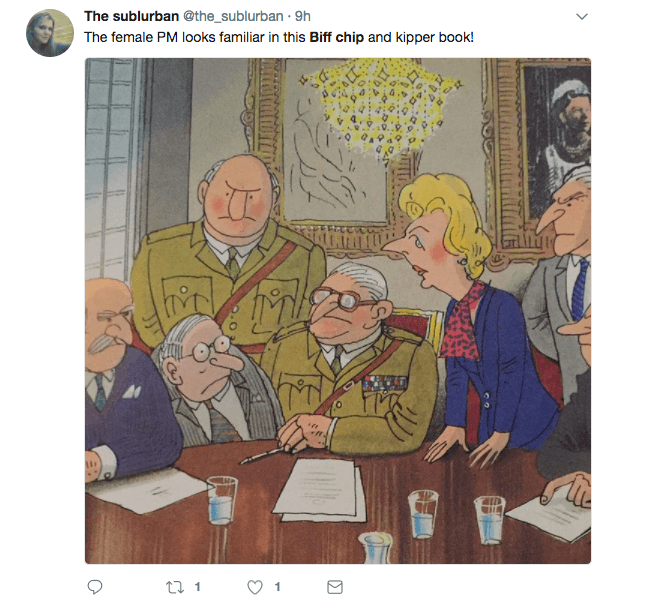 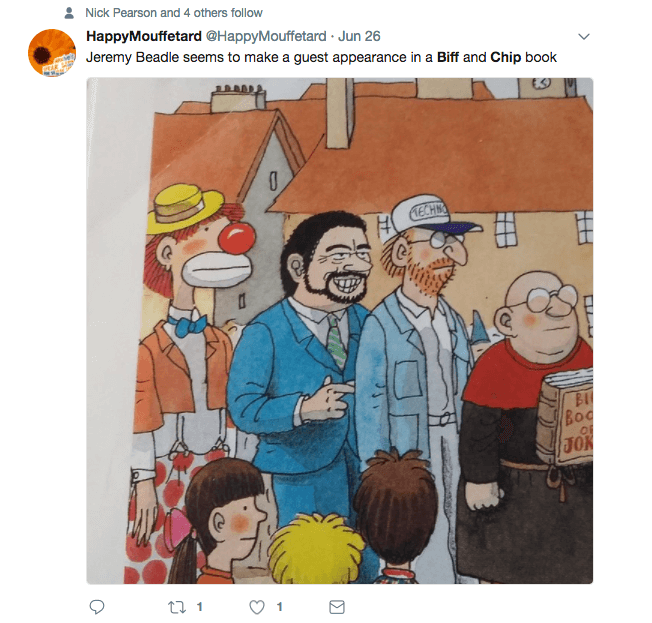 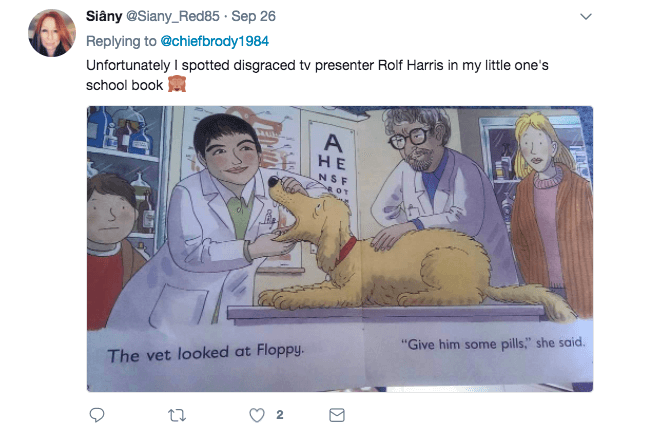 Meanwhile, Dad’s chosen reading material appears to be Hello magazine, while Gran appears to be a Nirvana fan, judging by the name of her house! 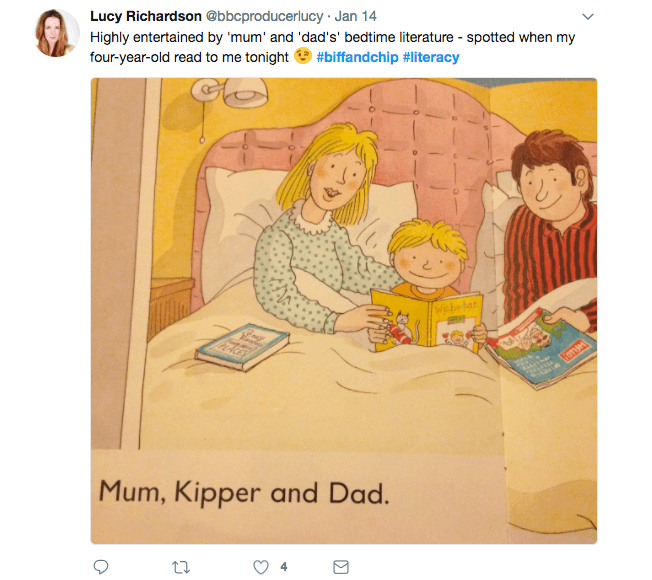 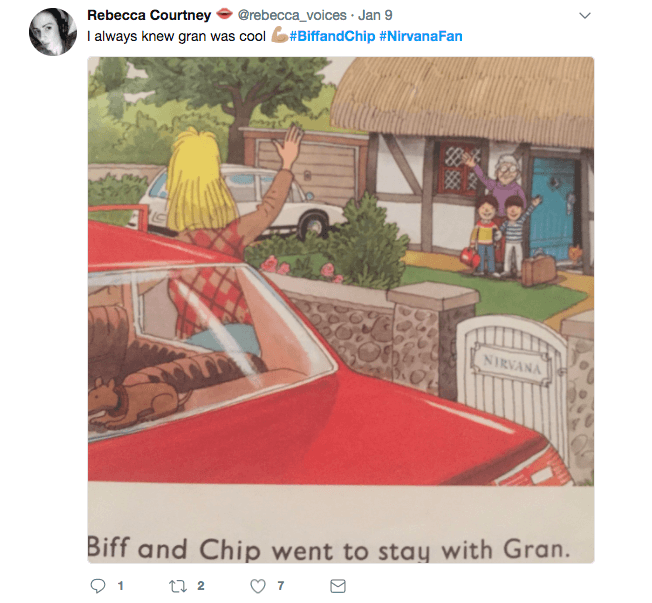 Another picture shows Dad giving one of his children the bird – – presumably annoyed after being disturbed for the umpteenth time. 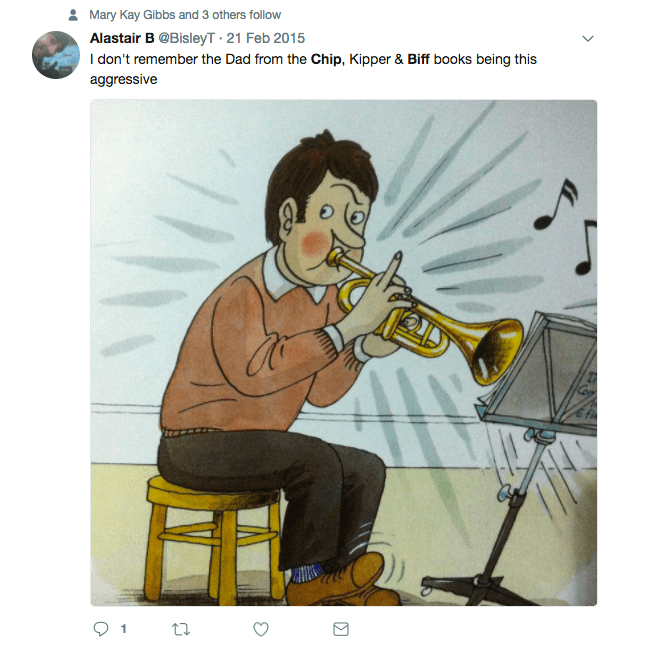 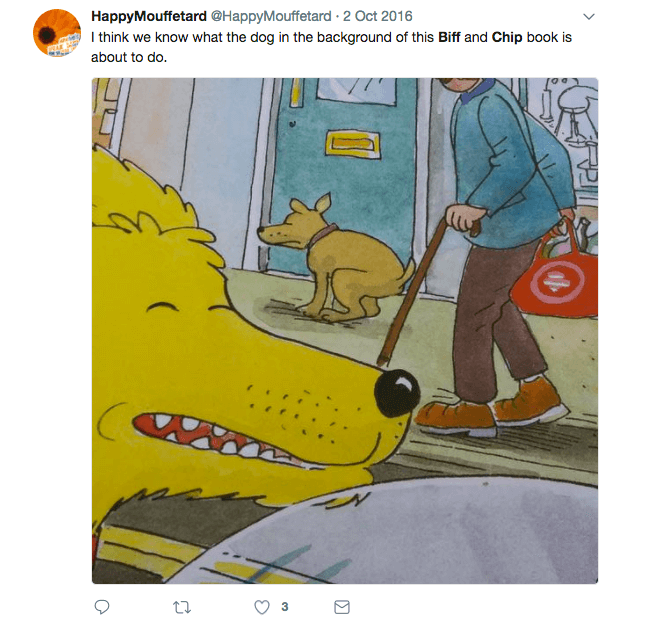 And some rather dubiously-named toothpaste. 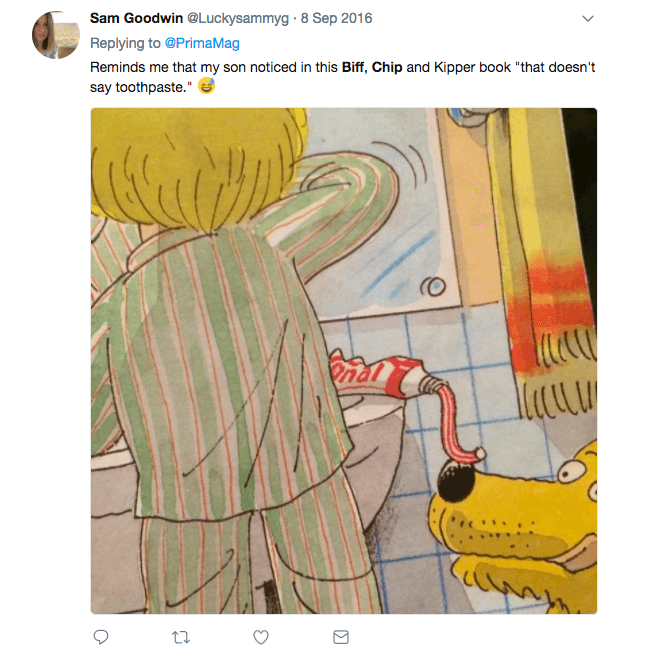 Dad, meanwhile looks surprised in another story to find that “it wasn’t floppy!” 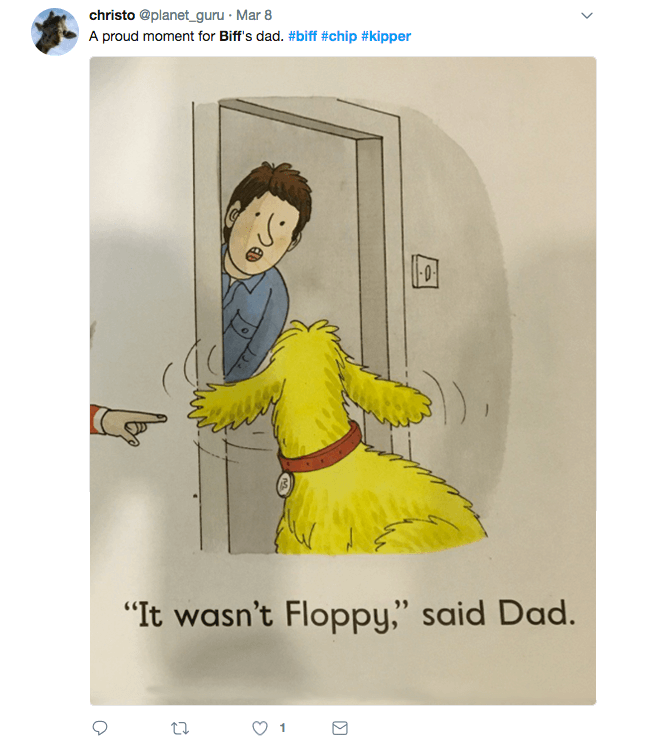 In another story, Dad can be seen sitting on a Spacehopper with a face that looks disturbingly like a penis… 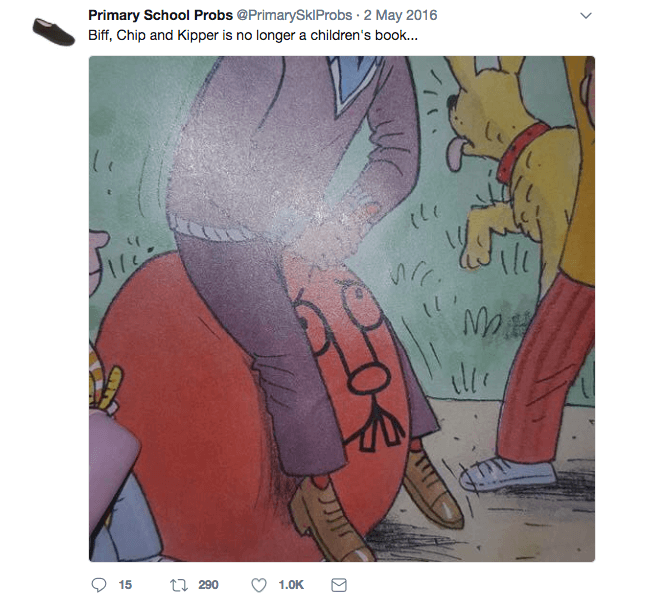 Some of the illustrations are more tame, such as the one of dad unboxing his latest Cherry Mack computer. 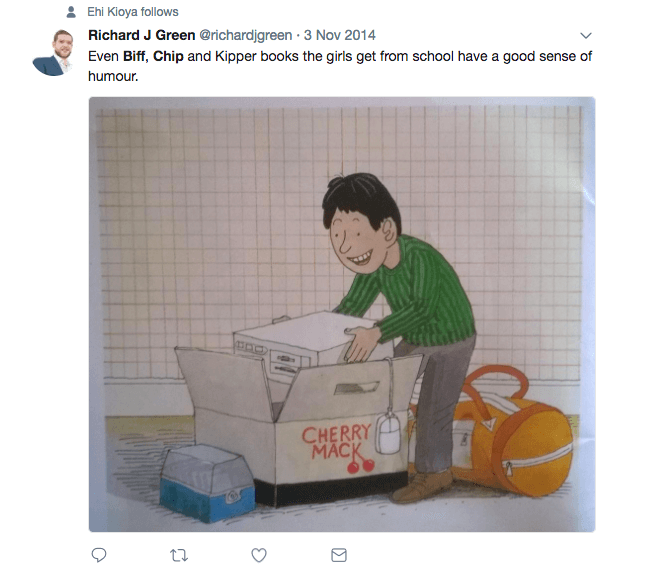 While in others, it’s not so much the drawings as the text that provide the entertainment.

“How do you keep a straight face when a five year old reads this without a pause?” asked one Twitter user. 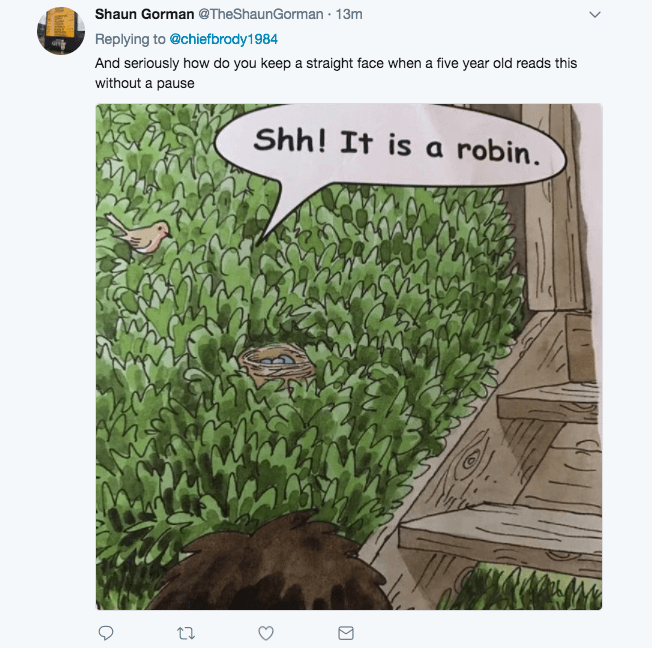 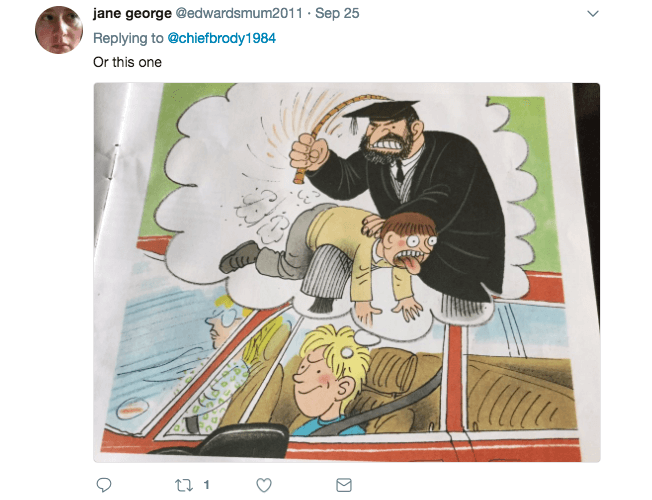 There are more than 800 titles in the Biff, Chip and Kipper series, which is a mainstay of the UK’s national curriculum. The books are used in 80 percent of British primary schools.