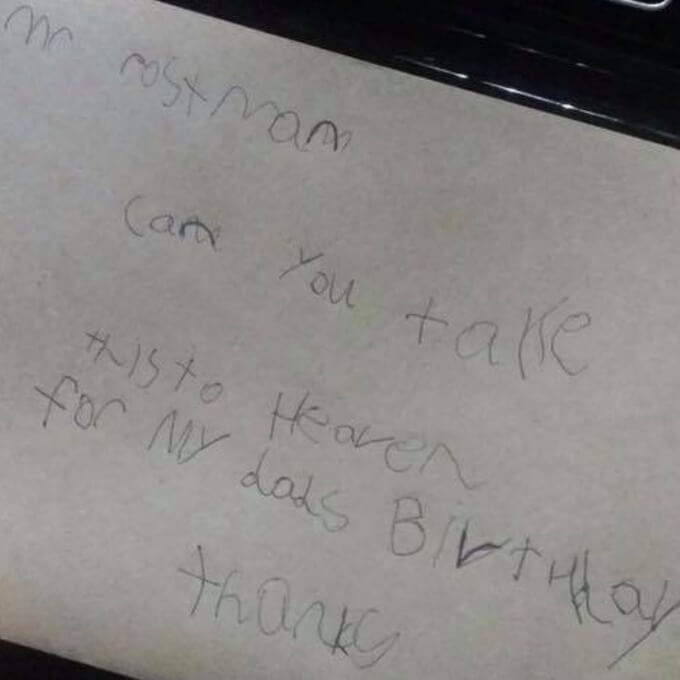 A grieving seven-year-old boy who sent a birthday card to his dad in Heaven was amazed to get a response from the Royal Mail to say it had been delivered safely.

Jase from West Lothian in Scotland, wrote a note to his father and asked Royal Mail: “Can you take this to heaven for my dad’s birthday?”

The schoolboy, whose dad James Hyndman died in 2014, later received a letter from Royal Mail telling him how the postman had navigated through “stars and other galactic objects” to get the letter sent to his dad. 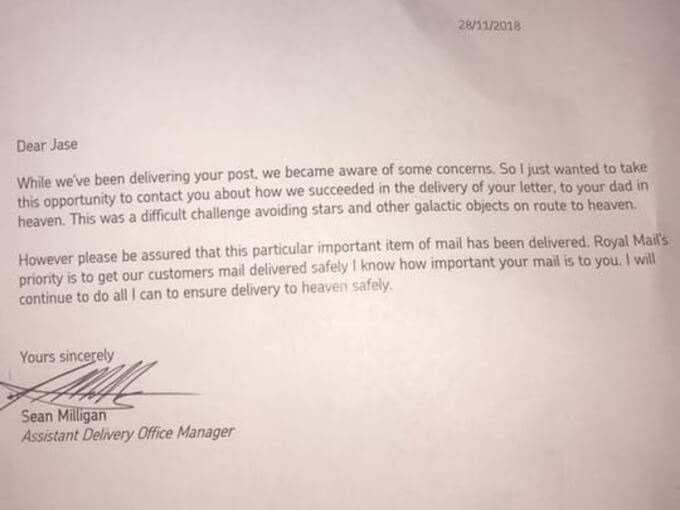 The letter read: “I just wanted to take this opportunity to contact you about how we succeeded in the delivery of your letter, to your dad in Heaven. “This was a difficult challenge avoiding the stars and other galactic objects on route to Heaven.”

“However please be assured that this particular important item of mail has been delivered. Royal Mail’s priority is to get our customers mail delivered safely I know how important your mail is to you. I will continue to do all I can to ensure delivery to Heaven safely.”

Jase’s mum Teri told the Evening News she was overwhelmed by the postman’s kindness and generosity saying the gesture had “restored her faith in humanity”. “When Jase opened the letter he just said, ‘Wow it really got there – my dad’s really got it’,” she said. “It’s just so amazing and so overwhelming.”

“The really hard bit when you’ve lost a partner is that you’ve lost your co-pilot and you are always the one trying to find the balloons in the garden.”

“This is the one time that I haven’t had to do that. Royal Mail took that out of my hands and for me that was big really big deal.”

Despite the emotion of the situation Teri said Jase had been laughing about how funny he thought his dad would find the whole situation. “He said that dad would be really, really laughing. He is just amazed and has carried that letter in his pocket since he got – what an incredible job they have done.”