Primary school sends children a letter ahead of their exams, reminding them that there are “many ways of being smart”.

A school in South Yorkshire has sent a heartwarming letter to its pupils, telling them that there is more to life than exam results.

The letter was sent out to Year Six pupils at St Joseph’s Primary School in Rawmarsh, Rotherham ahead of their SATs tests, which they are due to sit next week.

The message told them to remember that “the assessments will tell you something, but they will not tell you everything”.

The letter was sent out on Friday, and was signed jointly by the class teacher, Mrs Smith, and two teaching assistants, Mrs Boden and Mrs Spink.

It was addressed directly to pupils themselves, presented to them in a sealed envelope.

The letter is not particularly original (a similar one surfaced on Twitter around 5 years ago in the US), though it has been edited to include specific details about the pupils to whom it is addressed, such as the fact that one of them knows “every dinosaur there ever was”, and that another’s face turns red when they are feeling shy.

Posting about the letter on Facebook, school parent Jenny Odell said her voice was getting a little “wobbly” as she read it to her 10-year-old son Jack.

“He opened it and gave it straight to me when he saw that it was about SATs,” she said. “I soon realised it was meant for him though and I read it aloud.”

“It’s just so lovely and true, I’ll admit I was a bit teary by the time I reached the end.” 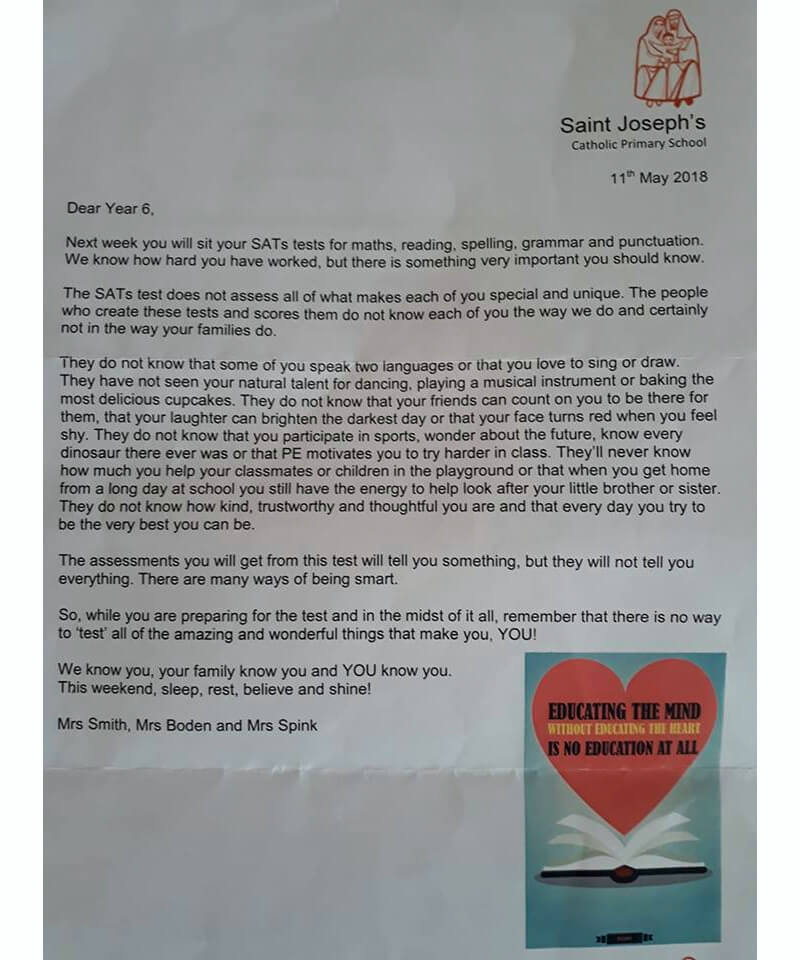 THE LETTER IN FULL

Next week you will sit your SATs tests for maths, reading, spelling, grammar and punctuation. We know how hard you have worked, but there is something very important you should know.

The SATs test does not assess all of what makes each of you special and unique. The people who create these tests and score them do not know each of you the way we do and certainly not in the way your families do.

They do not know that some of you speak two languages or that you love to sing or draw. They have not seen your natural talent for dancing, playing a musical instrument or baking the most delicious cupcakes. They do not know that your friends can count on you to be there for them, that your laughter can brighten the darkest day or that your face turns red when you feel shy. They do not know that you participate in sports, wonder about the future, know every dinosaur there ever was or that PE motivates you to try harder in class. They’ll never know how much you help your classmates or children in the playground or that when you get home from a long day at school you still have the energy to look after your little brother or sister. They do not know how kind, trustworthy and thoughtful you are and that every day you try to be the very best you can be.

The assessments you will get from this test will tell you something, but they will not tell you everything. There are many ways of being smart.

So, while you are preparing for the test and in the midst of it all, remember that there is no way to ‘test’ all of the amazing and wonderful things that make you YOU!

We know you, your family know you and YOU know you. This weekend, sleep, rest, believe and shine!