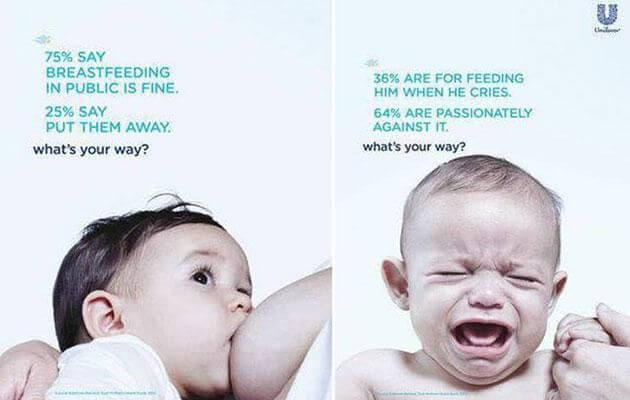 Skincare brand Dove has come under fire for their latest campaign discussing breastfeeding in public.

Another advert shows a crying baby accompanied by text that reads: “36% are for feeding him when he cries, 64% are passionately against it. What’s your way?”

.@Dove this is disgusting & divisive especially during #Breastfeeding Week and the UK has one of the lowest BF rates in the world. pic.twitter.com/yQjdpwYV4f

And then there’s the statement on the brand’s website that states that “whether you’re among the 66% who think that breastfeeding in public is fine, or the 34% who think otherwise, whatever choice you make, we are with you every step of the way. ”

The ads have been shared thousands of times on social media, prompting with mums sharing their “disgust” at the brand’s stance and questioning why “anyone would support being ‘passionately against’ breastfeeding”.

The Advertising Standards Authority has reportedly received more than 150 complaints, including concerns the ad will drive negativity around breastfeeding in public.