A Scottish mum has been banned from LinkedIn after posting an emotional article on the platform about the struggles faced by parents who work from home.

Cara Mackay – whose company Gillies & Mackay manufactures what she describes as “the best sheds in the world”, posted an article on the popular networking site last week with the subject line: ‘How to f*****g work from home’ (only without the asterisks!) 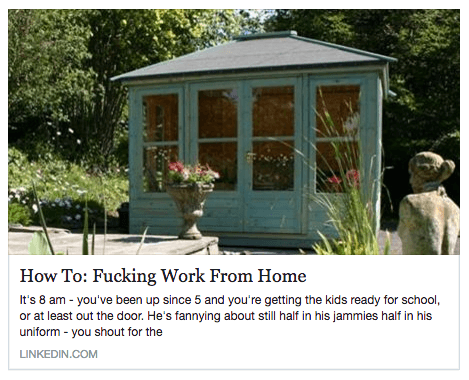 The article struck a chord with many parents, perfectly capturing in word the daily tensions many of us feel when trying to balance our home, family and work lives.

“It’s 8 am—you’ve been up since 5 and you’re getting the kids ready for school, or at least out the door. He’s fannying about still half in his jammies half in his uniform—you shout for the MILLIONTH time… “Shoes lad, where’s your shoes?!”

And while the Internet was divided on the use of the f-word in the headline, most readers took the post — a relatable story of a working parent trying to navigate their way through a daily routine and looking for a place of respite — in the honest spirit it was intended.

“I had written ‘how to work from home’ as my subject title, then said ‘no, it’s how to f*****g work from home’, because it can be such a nightmare. I was trying to get emotion across,” explained Cara.


“Swearing is an emotional thing – especially in the Scottish dialect – not necessarily an aggressive or foul thing. The way we express ourselves sometimes requires these words. So I did that and it went viral – it just went completely crazy.”

“You stumble past all that shite lying in the hall and make a break for the kitchen table. 30 minutes in to your emails that you were NOT supposed to open before starting on the actual work… You think. Huh, I know, I’ll just sort that washing out and load the dish washer whilst I’m thinking over a million and one other things that need doing. Before you know it you’ve spent your day in and out of different tasks not completing any and the house is still a shit pit regardless of your half-arsed attempts. 3.15pm It’s time to get the kids and chaos descends once more.”

The controversial post had brought about a spike in orders worth an estimated £100,000 to the business, which Cara says she now stands to lose if LinkedIn doesn’t return access to the account.

“I’m in the middle of courting six clients on very large projects on this platform, which are to be exported down south,” she said. “Now they’re going to be wondering where I’ve gone. I have absolutely no way of contacting those six clients.”

Despite holding a premium account with the network, Cara has not received an explanation for the ban, but believes it was taken offline for one simple reason: “probably something to do with me saying f*****g”!

Those wishing to pledge support for Cara’s freedom of expression on LinkedIn are encouraged to use the hashtag #swearygate on social media.