Google has unveiled a new product that is intended to teach kids how to programme without having to learn traditional coding.

The idea is based on a concept called tangible programming and involves a collection of boards and so-called “pucks” that can be arranged to provide different commands and outcomes. These connect to a Project Bloks “Brain Board” that enable the blocks to communicate with and control toys and other smart devices.

But Google isn’t about to become a toymaker. The tech giant says the blocks have primarily been designed as a platform that partners can use as a basis for educational tools. Google’s thinking is that by using this model (the Android model, essentially), toymakers will be able to building coding products and a wider variety of toys will be put out into the market.

“What we bring to the table is the hardware underpinnings,” Jayme Goldstein, the leader of the project said. “It’s a system that designers, developers and researchers can use to make all kinds of physical programming experiences for kids.” 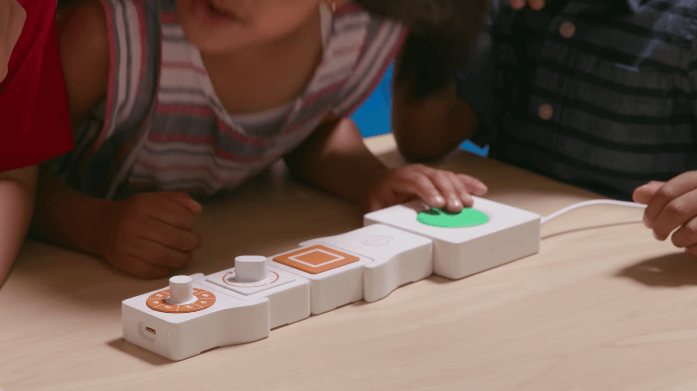 Demonstrating how such products might work, Google has released video footage of children controlling the movement of a toy robot by using the bloks. Another example shows how the bloks can be used to compose music and send it to a wireless speaker.

“One of the big things about teaching kids how to programme is that they can express ideas that they wouldn’t be able to express otherwise,” Blikstein said in a video demonstration of the product.

“Young kids learn by being social, being collaborative by playing with things, by exploring with their hands. Taking what’s natural to them and then adding a new skill such as computing and programming I think will have the best of both worlds.”