We’re all familiar with Take Your Kids to Work Day – and now ITV’s Loose Women are doing just that.

The offspring of Katie Price, Andrea McLean, Nadia Sawalha and Kaye Adams will be interviewing guests and airing their views during a one-off Easter Special, Loose Women & Kids later today. Appearing alongside their Loose Women mums, the children will discuss a number of subjects ranging from marriage to the appropriate age kids should be allowed to wear make-up.

Not all the comments made on the pre-recorded show will be broadcast, however, with reports suggesting that some of the children’s comments were cut out of the show at their mothers’ request. 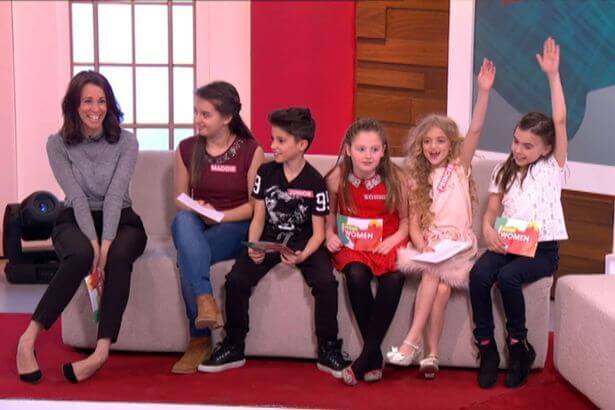 During the pre-recorded show, Katie Price’s 10-year-old son Junior reportedly shocked the audience by telling them that his mum brought a “prisoner” home.

A source quoted in the Sun said: “She was mortified and didn’t know where it came from. But Junior was clearly joking and as the remark had no context in the conversation, ITV agreed to cut it from the show.”

Junior, Katie’s son by ex-husband Peter Andre, also reportedly asked the former glamour model: “Why did you divorce my dad?” He then apparently went on to tell the audience that his mum moans about Peter Andre’s current wife Emily McDonagh.

He even laid into Katie for tweeting snaps of her daughter Princess — also on the Loose Women show — with make-up on. Junior warned “paedophiles” could have seen the images.